Well, first of all thanks for doing that interview with us and maybe you could introduce yourself a little bit to our readers?
Hey! Thank you for having me! My name is Jo, I sing in a pop punk (well, we cross over to several genres here, but well…) band called Coral Springs. We are from the Netherlands and released our debut album ‚Always Lost, Never Found‚ early 2019!

How did you get into the punk scene?
Ha, thanks for making me feel old. We have to go way back for that! I had a small group of friends at my highschool and this one guy kept on nagging me how my ‚listening to metal‘ habits made me an angry person and I needed to be more happy. So, he kept insisting I’d listen to punkrock. He took me to my first shows and basically those years formed my taste in music and I lingered, while they all grew out of it (their words). Which is funny, because punkrock got me amazing memories and gigs.
I got into the scene by participating in bands instead of just watching them. Especially since playing with Coral Springs. I feel so grateful for knowing so many cool people and calling so many people friends through a scene created by music.

If you would have to choose one record to introduce a totally unknown person to punkrock, which one would it be?
That’s a dificult one. Since I mostly adore skate punk and it is usually not the most accessible form of punkrock… I guess Exister by Hot Water Music, because it features all the things I love about the genre: the memories, good lyrics, amazing voice, powerful songs and accessible!

Coral Springs recently released a new video. Please tell us a bit more about that!
Haha, well, it is the last song of our album and we figured most people don’t get that far while listening (inside joke meets insecurity) while others claimed it was their favourite song… So it felt like we should get it more of the attention it deserves. We filmed several shows in the Netherlands and abroad, with a random GoPro, and made a video that we would still watch for the memories of the great nights we had. It features a night in Finland, several in Belgium, some birthday parties and shows we had with great bands like Darko, Captain Trips and One Hidden Frame.

When will we hear some new stuff from Coral Springs?
We just began writing again, but no specific plans yet. The little scraps of songs we already have are quite heavy though (yay!). And to be honest, it doesn’t feel like our debut album is almost one year old already at all…

Coral Springs is going to Japan in May! I assume you are really stoked about that? haha
O my, yeeees. This is a dream! I’ve always wanted to go to Japan and now I get to go with some of the best guys and even play our songs… Can’t wait.

Last year I saw you perform a song with Much the same at Brakrock in Belgium. How was it?
Hahaha! I have this thing where I idolize a band and end up being on stage with them… People don’t believe it, but it seriously just happens to me! But to answer your question, it was amazing. Nice guys and great band. Great song too! I was really nervous, though. I love Brakrock, so being on that huge stage was extra special. 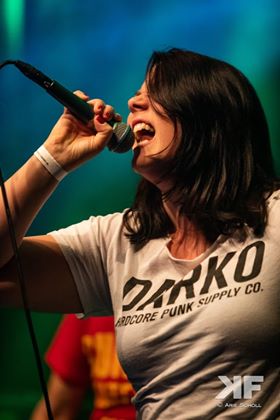 Talking about festivals, I know that you are attending punk rock festivals on a regular basis. What are your plans for this year?
Well, too bad there’s no Groezrock this year (at least, not that I know of). That’s usually an annual festival to attend. Brakrock is always on the list. Maybe Jera On Air, maybe even Graspop (would be a first). Because of Japan I don’t know if I get to attend many festivals and specifically Punk Rock Holiday, although I miss the cold river a lot. Last time we went was 2017, when I sang with Undeclinable.

I know that you are somehow a professionally trained singer. So how is it to be the only real singer in the whole punk scene?
Oof, I wouldn’t say that though! But it is weird when people I look up to ask me for advice on their vocals… On the other hand, I have provided loads of people who didn’t ask for it (or need it, mostly) advice on their voice without them asking for it. Just because of beer. But to continue with my real answer: I actually feel quite insecure about my voice, because I’m always afraid I’m using too much technique for punkrock. People used to tell me that when I just started out in bands and you never quite let that go, right? Being called Mariah Carey haunts you for life, hahaha!

I don’t want to go too far into your private life, but I know that you are a teacher in your “real” life! Do your students know your music? And if so, how do they react?
If they found out without me telling them, they are shocked and think it is noise. If I show them and say: ‚Be warned, you will not like it!‘ they will say it is fine. Some reversed psychology there! But it’s usually like showing your music to your family: brutally honest. 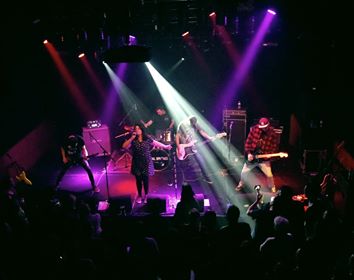 I somehow have to ask that question, although I know that is a really complex topic and maybe not so easy to ask, but we are still far away from an equal number of women and men on stage in the punk scene! What do you think are the main reasons? Do you see a change compared to the last years?
Hmmm. I don’t know… I think women support each other more than a few years ago, because the conversation opened up about it. There’s still a weird stigma on women in bands though. I think that’s the main issue and discourages a lot of women to seriously pursue any musical ambitions, especially in bands. Loads of people have come up to me, saying stuff like ‚you guys were really good! And I never like bands with girls in it‘. Wait, why? And why would you not keep that insignificant detail to yourself? Why does it matter in a negative way if there’s a girl in the band?

At the moment as I’m writing this questions, the number one punk rock festival in Europe, punk rock holiday, has announced about 50 bands and, correct me if I’m wrong, but only one of those bands has female members and people are not really talking about that. What do you think about that?
Well, next to the fact that I would have wanted to play all those festivals, I honestly don’t know. I feel there needs to be more of a balance, obviously. Because as I previously said, I think it is ridiculous it is still an issue if a band has female members… But is positively discriminating bands a way to fix this? We could have a long conversation about this, because I honestly don’t know answers to the obvious problem. You know what, we will have a good conversation about this when I see you!

A record that saves every shitty day?
Volition – Protest the Hero. All time favourite. Every song. Everything. This records changed my view on music and especially my vocal abilities. And before you say this record is ‚too metal‘, they started out as skatepunk and are still punkrock by heart!

This recent release really disappointed me?
The first song of the new album ‚Season of the Flood‚ by Alexisonfire didn’t do it for me.

This interview is part of our DIYorcry: people that shape our scene series. In one sentence, what does DIY mean to you?
Meeting people by helping each other out, returning the favour, becoming friends, endless summers with amazing festivals and said friends… O, I could go on and on. I try to explain our DIY scene to colleagues sometimes, it’s hopeless. They won’t get it and I can’t blame them: it’s special.

Thanks a lot for doing that interview with us!