First of all thanks a lot for doing this interview with us! Maybe as an introduction for our readers, please give us the basics about your band!
We’re Drunktank from The Netherlands.  Also known as The Infamous Four.  We have been damaging ears and drinking your beers  for about 17 years.  We bring fast, melodic, sing-along 90’s skatepunk in the tradition of Epitaph, Fat Wreck Chords and Burning Heart bands, combined with riffs and guitar harmonics from 80’s metal. We started in 2003 and released 4 EP’s and two full-length albums The Infamous Four (2010) and Return Of The Infamous Four (2019).
We also like to party and try to pull as many people into our maelstrom of mayhem during the live shows. So our shows are usually very energetic and there are lots of fists in the air!
Basically we’re just four guys who like to rock ‘n roll and don’t want to take ourselves to seriously. Unless the shit’s getting serious 🙂

I’ve already asked Antillectual a few months ago the same question. What is the dutch scene like these days?
I think we’re doing quite good. When I look at the bands: there are established bands, rising bands and newcomers.  All the bands help each other out with contacts, shows, supportslots and promo. Beside the bands there are some great labels like Morning Wood Records, Shield Recordings and White Russian Records.
There are also great things going on to make our beloved scene tighter like The Anthem Project,  Punk Rock Soccer Tournament and Epic Merch Store.
The Anthem Project ‘the legacy of a skatepunk generation’ is focusing on getting more attention for the scene and making a book about the impact of skatepunk on the lives of people within the Dutch scene, but they also have plans on working on establishing a new generation of punkrockers.
We have some cool festivals too like Rock ‘n Ramps, Punk Rock Riot, Puck Rock Academy and Antishit Fest.
So things are definitely happening in Holland!

Any new dutch bands we all definitely have to check out?
Not all of these bands are particularly new: Camp High Gain, Sun-O-Bathers, Ink Bomb, Meddler,
I Against I, Dowzer, Coral Springs, Rocket Fuel, March, Lone Wolf, The Real Danger, Manu Armata.

I saw your last record “Return of the infamous four” being voted on the 5th rank between bands like “Good Riddance” and “Much the same” in the “Skatepunkers record of the year award 2019”. Must be a great feeling?
A great feeling might still be an understatement. Let’s say: Incredible!!! We were blown away. Releasing a new album after 9 years and making it to the top 5 on this poll is truly amazing. It really puts a crown on the hard work we’ve put in the album.
So yes, it has raised our spirits even higher and makes us want to go even harder then we are going right now!
For Dorian it’s been a special one because he reached the 6th place with Dead Neck before. So now we have to go for the 4th place with our next album (or better ofcourse:))

Speaking of your latest record. One of the labels you worked with is an Austrian label SBÄM records! How did that happen?
We were looking for good partners to work with in as many countries as possible. A DIY label knows their way round in their own country and can help us get more following in their area. SBÄM is well known and have great bands on their roster. We contacted them and things worked out pretty well.

When I was listening to your song “Hammer of Justice” I had to laugh at the end of the song. So who of you guys is the big “The wire” fan?
Putting in samples is actually one of the funniest things to do. We’ve all seen The Wire, but I’m not sure anymore who came up with it. We have been waiting for ages to use it on the album since the series ended in 2008. But it was worth the wait! Sheeeeeeeeeeeet!

In your song “Courage of a few” you sing about a protest movement:

They gathered in the streets and proved to us all
The universal law: every tyrant will fall
It only take the courage of a few
They made a stand for their freedom, made the world hear them, out in the street
Oppressing powers will fear them, this marks the era of their defeat

Is it about a certain movement or just a song to bring the people back on the streets and stand up for their rights?
The song is about what happened on Tahrirsquare in Egypt. Initially the song was called “The Square”. We changed the title so it would fit better for a more broad approach and that it can be (re)used for other revolutions. We stand for sustainability.  haha

Where do you guys take the inspirations from for your lyrics and songs?
It’s difficult to give a short answer to this question because the creation of a song usually follows a process through the ‘Drunktank collective’. The Drunktank collective consists mostly of former band members and we all have lead very different lives, so the inspirations are very versatile. So a song can be about personal experiences (i.e. Green Button is about how Dorian (almost) blew himself up by pressing a green button), geopolitical topics (like Mother Russia), social topics (like We want more) or just about having a blast with your mates (like Hellraisers). 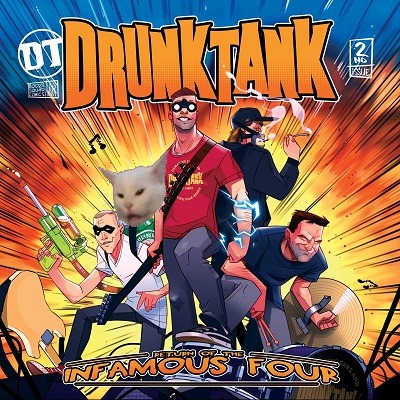 One thing also worth mentioning is the great artwork of your latest release that shows the whole band as super heroes armed with instruments and other stuff! Who is the artist behind that? Who had the idea for it?
The artist behind the artwork is Benjamin Paulus. The basic idea is derived from our first album but Benjamin took it to a whole new level! When he came with the first sketches we were like: Holy shit, this stuff is super awesome!!!.
The idea has been tweaked by very drunk sessions at Dorian’s place in which we fantasized about being superheroes and almost wrecked Dorian’s basement by expressing our ‘superpowers’. Man, we should have videotaped those sessions; it would have been hilarious material hahaha.
In anyway, it resulted in an awesome lyrics video for our song Hammer of justice which was also drawn by Benjamin Paulus and animated by Bram Bergs. You should check it out on our website!

I know you have a lot of Heavy Metal influences in your music. So how much Metal can Punkrock take?
We grew up with both punkrock and metal. Combining the two styles feels very natural to us. Of course we all have different preferences and are influenced differently.
The difference in influences could be a base for displeasure and tension within the band. But personally I think there should always be differences of such in a band. Because then you’ll end up with a compromise which (hopefully) results in that golden middle way! The trick is to give each other enough room for their musical ideas, no matter what style it is.

You are already confirmed for “Brakrock 2020” which I’m really stoked! But for all our Austrian readers, will you guys also tour through our country in the closer future?
We’re super stoked for Brakrock! And we have more great things coming up. Three dates in Germany in March with Heathcliff. Manchester Punk Fest in the UK in April and more shows in The Netherlands and Belgium. Really looking forward to our show with Cigar and Mainline 10 in June in Belgium too. That is going to be a banger for sure!
There are no concrete plans for touring Austria yet, although we have been talking to SBÄM about SBÄM fest. We hope to work that out for the Fall edition 2020 or maybe the regular edition in 2021. No guarantees on this though, nothing confirmed or whatsoever yet.

Before we end this interview, I would like to do some short questions:
Is there a band that you desperately want to go on tour with?
I think we can name a lot of bands here, but let’s start with: Iron Maiden and Pennywise!
And, No Fun At All, and Bad Religion, and Bigwig, and Satanic Surfers and, and, and, and a whole bunch more.

What’s the first thing that comes to your mind when you think of Austria?
Chocolate and your weizenbier Edelweiss! We eat candy in bed whilst on tour…

What are your future plans? Any new releases? Tours?
Playing more shows outside The Netherlands and going on our first tour outside of Europe this year. We can’t say anything about that yet though.
On March 5th our debut album The Infamous Four turns 10 years old. It is released on vinyl through Morning Wood Records and Soundspeed Records and on cassette through Trilob Records, to celebrate this milestone for the first time on vinyl and cassette that is! 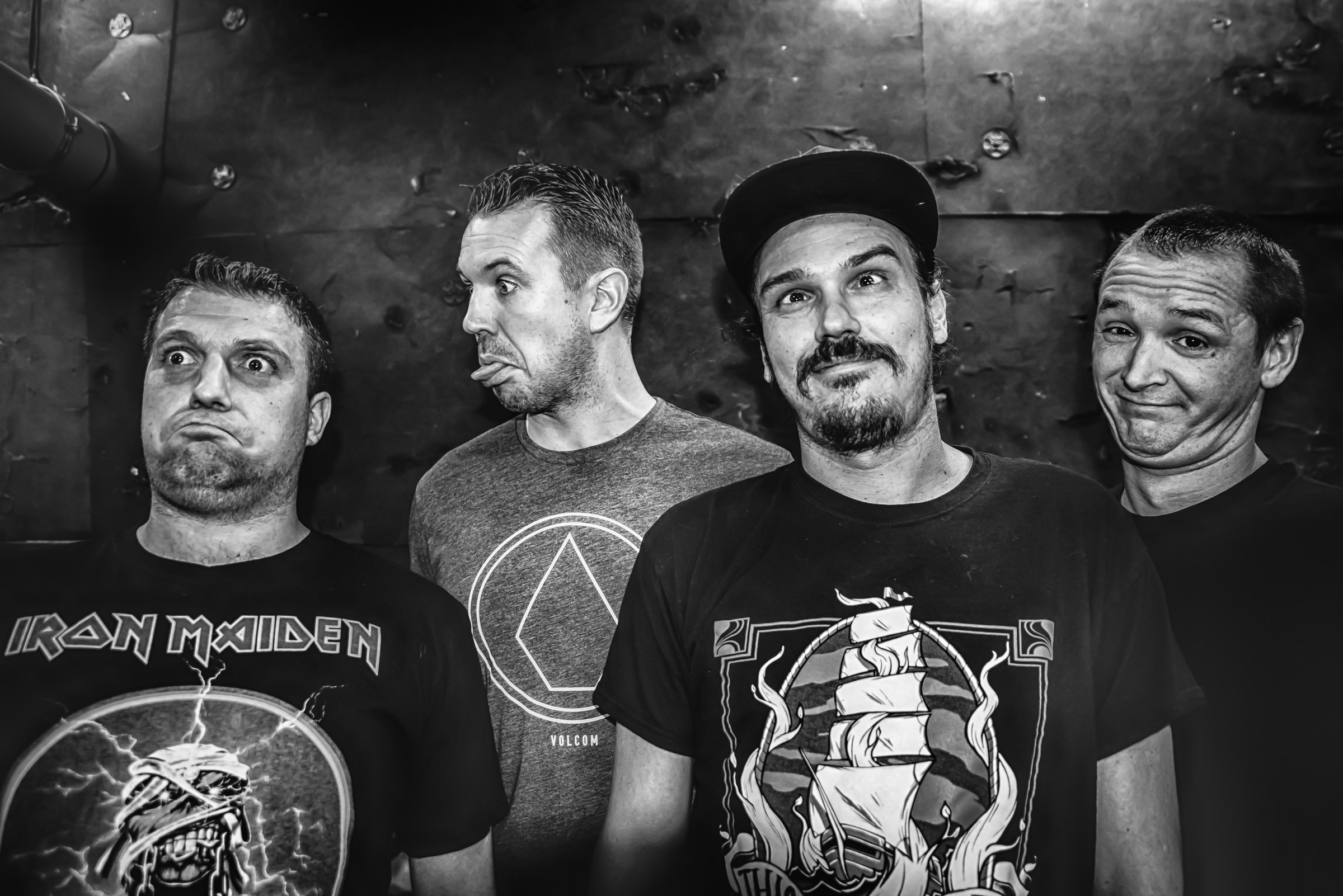