It was 2003, I was 17 years old and George W. Bush was president of the USA. Perfect age for being a young rebellious punk kid and NOFX delivered the soundtrack. „The war on errorism“ is in my opinion close to a masterpiece, a mixture between critical and provocative political songs and on the other hand the cynical fun songs we all loved NOFX for in those days.
If you hear the first few chords of the first track „the separation of church and skate“ you already know what you will expect in the next 35 minutes.

„…Frank, the new CEO, had to answer to the board
the board was getting anxious, and the shareholders
were on the bed, legs in air, ass cheeks opened wide
they were about to get fucked like it was their first time
when one makes 20 million, and 10, 000 people lose
what keeps that one from swallowing a shotgun…“
– The Irrationality of Rationality

That’s NOFX’s answer to an economy instabile as noboday can imagine. If you read through the lyrics you just always think, they could have written this record in the last summer and not 16 years ago.
Mattersville, maybe my favourite track on the whole record, deals with how the band wants to spend their life after a music career and how they all live in the same neighbourhood, just having fun and creating their own „utopia“ and dreamland.

„…There’s a place some of us choose to live
Gated community – cops can’t come in
A neighborhood for punks over the hill
We’ll spend our golden years in Mattersville
We could do whatever we want, whenever we please
There’s always a keg of beer and a block of cheese…“
– Mattersville

13 Stitches also somehow stands out to me as a song, cause it’s a hymne on my favourite band The Descendents and how Fat Mike first got in touch with them back in the 80ies.

All in all it’s a record that is still very important, but more than that it’s just a great record that still kicks ass like it did 16 years ago when I first heard it. The only thing I’m thinking of, why isn’t that band able to put out such great records anymore, cause honestly the last three NOFX records were just disappointing.
– written by Martin 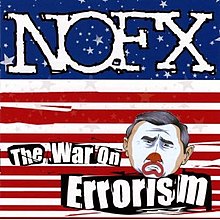