What should I say? There is hardly a band acronym that is as suitable for provocations as MDC. The official meanings are amongst other things Millions of Dead Cops, More Dead Cops or Millions of Damn Christians. If it was up to me, More Damaged Conservatives or Make Dreads Cutable would be part of these meanings. But let us do not talk about me, let’s take a look at the band!

MDC were founded in 1979 as The Stains in Austin/ Texas and played their first gig under this name in August 1980. One year later, they were releasing their legendary “John Wayne was a Nazi”-7’’ (also represented on the first Long Play record). Although, The Stains were next to The Dicks and Big Boys one of the pioneering hardcore punk bands in Austin, they moved to San Francisco in 1982 and renamed themselves MDC. Also in 1982, they released their first LP Millions of Dead Cops on their own label R Radical Records. Incidentally, they were supported by Jello Biafra from the Dead Kennedys who used his label Alternative Tentacles for distributing the album.

MDC managed it to put 14 songs on their first record without taking longer than 21 minutes playtime. Although most of the songs take less than 2 minutes, the most of them have usually between 20 and 25 lines of text. No matter whether Cooperate Deathburger (“Feeding all your grain to cows, dead children rest in peace”) or Dead Cops (“Big bad and blue, they’re in the Klan too”) – I don’t think that anything is sacred to the band. No matter whether Born To Die (“No war, no KKK, no fascist USA”) or Violent Redneck (“So you’re out to kick some ass, brainless goon got no class”) – I don’t think that the band is having respect for anything. This attitude is great and that was only Side A of this wonderful LP.

Side B continues with the dismantling of one of the most famous but also racist and conservative US film heroes of all time.  John Wayne was a Nazi (“He liked to play S.S., he had a picture of Adolph ole‘ bo ucked in his cowboy vest”) is almost a kind of symbol for MDC’s archetypical ridicule and sarcasm towards the right wing and conservative part of US society. Songs like Dick For Brains and I Hate Work are practically self-explanatory, Greedy & Pathetic and Church & State do not contain any textual surprises too. Fast, nasty and best loud! After the rather fun song My Family Is A Little Weird (“My family is a little weird, Daddy wears a dress, Mommy grows a beard”), the album has founded a worthy conclusion with American Achievements. After almost 20 minutes, the band is saying “Fuck You!” towards an institutionalized USA for a last time (“Grey buildings, grey people, grey food, grey walls”).

The lyrical content of MDC expresses radical left and anarchistic political views. I think, this was in the early 1980s more an exception than a rule. Reagan Youth as a genre-comparison released their first record two years later, and I don’t know if the Dead Kennedys were so uncompromising like MDC. The Band still playing and the original LP is still available on Discogs or similar platforms for an average of 80 euros.
– Written by Martin Murpott 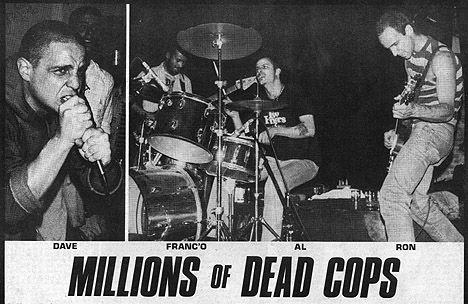