The term Dead on Arrival comes from the emergency system and means that a patient was already dead when he was admitted to the hospital. Oh well, D.O.A. are far from dead, even if there is only one original member left. The Canadians from Vancouver even released a new album in March 2020. It is called Treason and because I’m a lazy sod, it has taken me 2 months to finally write a few lines about it. 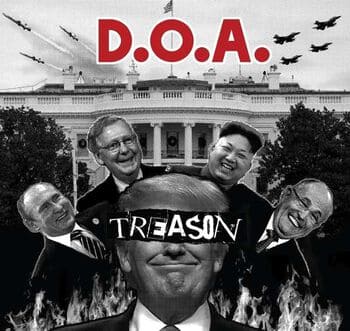 Musically at least, I have never fully understood why the band was assigned to the hardcore genre. I know, I know! Hardcore in the early 80s had a completely different meaning to all the “Neither fish nor fowl”-stuff from the 21st century. And yes, I know their second full album from 1981 was called Hardcore 81. For me personally, D.O.A was always just Punk Rock played fast – sometimes more, sometimes less influenced by Rock ’n’ Roll. But let’s not argue about it and let’s move on to their new album! As the writer of the review, I’m always right anyway.

Treason is as entertaining as it is short. 8 songs in 18 minutes including a well done Neil Young Cover (Hey Hey, My My) and a reissue of Fucked Up Ronnie which is now called Fucked Up Donald. The other six songs are quite varied which stops it from being repetitive. In terms of content, you get what you expect: against Trump for the second time in the song All The President’s Men (“Humpty Dumpty wanted a wall, but Humpty Dumpty is gonna have a fall”) or for freedom and against borders in Wait Till Tomorrow (“At the border, you were ripped, from your mother’s arms”). Just left-wing Punk Rock and that’s absolutely okay and indispensable as well. Still, they could have put one or two more songs on it. Hey guys, it’s marketed as a full album, not as an EP! To be fair: The band has made the songs available for free on YouTube.

What can I say, except that I hate writing conclusions? As a D.O.A fan, you really can’t go wrong with this release. As a Punk Rock fan in general, probably not either. The album might not be a “must-have”, but it’s definitely a “could have”. The record was released on Sudden Death and is available on vinyl and CD.
– written by Martin Murpott