After seeing that my suggestion for the latest Throwback Thursday voting has won, I on one hand was surprised that it has beaten the self titled record from Rancid and on the other hand I started to listen to the whole Matters record on constant repeat.
My history with Pulley started in 2003 when I was listening to the sampler Punk-O-Rama 8, that featured a Pulley song on disc 2 and the latest thing was me travelling all the way to Belgium to see them at Brackrock. Should have been the first time of me seeing them live, but as some may know, the spanish airport in Bilbao didn’t want me to see them.
What makes a good record a great record? Well, first of all it should have a great first track that makes you addicted to the record as soon as you hear it the first time. In that case A bad reputation is the best example of an insanely great opener to a record.

Going through the record you realize one thing, that Pulley extends the limit of how melodic a band can sound in 2004, by miles. The music is well executed and it’s all about Scott Radinsky’s vocals, who is by the way a former professional baseball pitcher (amongst others for the Chicago White Sox and Los Angeles Dodgers, two teams I at least consider to cheer for a bit haha) and coach, which always of course limited the band in touring.
I think for me the whole throwback Thursday thing here at Punktacks is somehow, like for all of us, some kind of cause to go through all the records we listened to in our youth, but haven’t heard in years. Last week when I started listening to the record on constant repeat again, I just thought what a masterpiece. It’s pretty hard to take two or three songs and write about them, cause already choosing songs would mean that I would spare out all the other great songs.
Of course there is this gem called Insects Destroy with its chorus that just get stuck in your head for years:

The older I get the more I can relate to the lyrics of Poltergeist about things you did in your past and that sometimes can hunt you.

And here starts the dilemma, I wrote about three songs, but could go on and on and write about every song on that record, cause, as I checked out the last 50 times I listened to the record, there is no bad song on that record.
To me Pulley always had a special place in my musical evolution, cause they will always stand for being maybe the most melodic Melodycore band I ever listened to.
– written by Martin 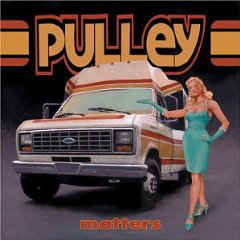